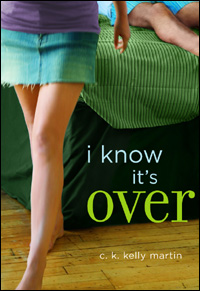 I recently read I Know It’s Over by C. K. Kelly Martin, and I have to say I enjoyed it a lot.  I picked it up because the cover struck me.  I love that the girl is in the foreground walking away, and the boy is lying on the bed.  Having now read it, I can say that it really encapsulates the whole mood of the book.

What I Liked About the Book

The main relationship in the book is, of course, Nick and Sasha, and it’s really well layered and suitably frustrating.  It’s clear why he is so infatuated/in love with her and also why he has such a hard time understanding her.  I don’t entirely understand her myself, which marks really good storytelling…or bad, I guess, depending on who you ask.  But I’m pretty sure that’s part of the point of the novel.

I also really liked Nick’s relationships with his parents, which are also well layered and suitably frustrating.  Nick’s feeling that he needs to be nice to his dad because his sister won’t and that he has to protect his mom’s feelings even when he himself is hurting are super believable and add different shades to his relationship with Sasha.

Then there are his two best friends who are so different but serve different functions.  I like that they all started out interested in the same thing (hockey) but that as they have gotten older, that’s not quite enough to keep the three of them together.  I also love how he identifies Keelor as his best friend, but as a reader, I felt that his true best friend is actually Nathan.  However, he needs different things from both guys so, essentially, they are both his best friends for different reasons.  I love that.

Also, near the end he befriends a girl, and the way they connect is very honest and believable as well.

I did not know this book is about teen pregnancy until I started reading it, and then I was pleasantly surprised.  I really enjoy the way it’s handled.  The book starts with the announcement of the pregnancy, and then goes back to show how Sasha and Nick got to that point.  So instead of the book being ABOUT the pregnancy, necessarily, it’s really moreso about their relationship, so that by the time it circles back to The Pregnancy, even that becomes more about their relationship than anything else.

The book is emotionally raw, which makes it both easy and hard to read at times.  Nick’s feelings are just all over the page, and, as stated previously, his frustrations with Sasha, his parents, his friends, and himself are just crystal clear.  It reminds me a lot of Coe Booth’s Kendra in that it was almost too overwhelming at times.

There was one part where a hockey game was explained in detail.  Okay, I’m mostly being facetious here.  I honestly can’t think of anything I didn’t like.

If you haven’t read it, I’d definitely add it to the to-read pile.