Did you read these kinds of works when you were an adolescent? Did you think they were silly or did you gain something from them? Do you enjoy them as an adult? Do you recommend them to students or other teens you’re in contact with? Which titles and to whom would you recommend them? What issues or circumstances would like to see address in YA? What are your recommended best reads and which would you honestly say are poor examples in this genre?

First things first.  I think it’s important to define what a problem novel is to me.  Someone in the comments section over at Color Online said they would call it realistic fiction, but I honestly kind of like the Wikipedia definition of an adolescent’s first confrontation with a social or personal ill.  Which, yes, realistic fiction.  But I would take it a little further.  Since most realistic fiction deals with problems, I’m thinking more specifically of novels I would describe by the social or personal ill first as opposed to, say, the quest the character is on.  Like Monster is about a boy in jail or Out of the Dust is about a girl surviving the Dust Bowl. Because most books require characters to have personal ills on whatever level for the sake of conflict, a problem novel would be more about a social ill than anything.  Meaning that when I think about the novel, I think about it first in terms of that social ill and recognize the ill as a social problem.  (I’m trying to think of realistic fiction, I don’t define as a problem novel, and so far I have True Confessions of a Hollywood Starlet [her sobriety is a big part of the novel, but I first think of it as her leaving her old life behind for a small town], Story of a Girl [double standards, family issues, teen pregnancy, but I first think of it as about a girl who did something and now is trying to figure out what that means for her–maybe the title has something to do with that], and A Northern Light [which, I know, murdered pregnant woman, but I think of it more as about Maddie trying to decide if she should go away to school or not].)

I would go a step further and say that it’s also to help teens gain understanding of people who are not like them that may have stories they don’t understand.  So if you know someone in jail or who has been raped or has an abusive parent, these kinds of books would benefit you.  And if you don’t personally know anyone facing these issues, you’ve probably heard about them on the news or whatever, so the books can personalize the story.

As a teen/adolescent, I read pretty voraciously, but I often don’t remember the books I read back then.  The only novels I remember that dealt with problems, honestly, are the SVH Very Special Topic books:  the one where Regina o.d.’s, the one where Robin is  anorexic, when Ken goes blind, etc. 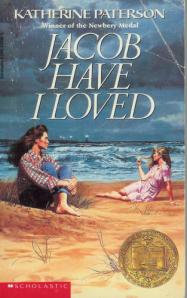 Those, and Jacob Have I Loved by Katherine Paterson, which is one of my favorite books ever of all time.  I would count it as a problem novel because it’s all about how Wheeze feels slighted by her family, and Catherine is the preferred sister:  she’s prettier and more talented, and more importantly, she almost died at birth.  I haven’t read the book in years, but Louise’s pain is just as palpable to me now as it was then.  Also, I never forgot the ending where Louise makes sure both twins she helps deliver receive equal attention so those babies won’t go through life the way she and her sister did.  OH MY HEART.

It’s only now as an adult that I can identify that most of the books I read now are problem novels–or realistic fiction.  And for me, the gold standard of problem novels is Monster by Walter Dean Myers.  Not only is it about a boy in the system, it’s also about the problems with the system. It also addresses all of the issues in a non-didactic way.  Everything is just put on the page for you to decide what to do with it.  (I wrote a whole paper on the book, so I’m trying to be concise.  Basically, the heteroglossia of the novel lends itself to the reader making up his/her own mind about the issues in the book.)  I also love that, in any of the classes I’ve taught on the book, there is never any agreement about whether Steve is innocent or guilty, but everybody can agree that the system is messed up.

In fact, I’d classify most of WDM’s books as problem novels:  Shooter (school shootings), The Beast (heroin), etc.  His most didactic book is the one on recidivism (A Handbook for Boys), and while I like it, I can imagine it’d be pretty annoying to a teen (as evidenced by the reaction of my students when I taught it).  The topic is still well handled, but, yeah, didactic.

Anyway, there are lots and lots of books I’ve read and like that fit this topic, but I’m going to narrow it down to five other books I’d recommend that all deal with different societal ills. 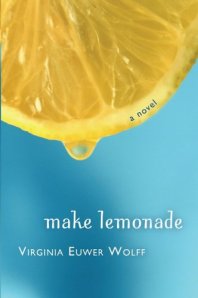 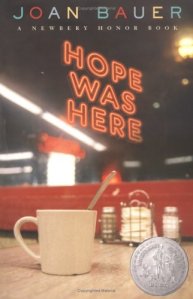 The Queen of Everything by Deb Caletti is about a girl whose dad kills his girlfriend’s husband.

Make Lemonade by Virginia Euwer Wolff is about a girl who babysits for a teen mom in their impoverished neighborhood.

Living Dead Girl by Elizabeth Scott is about a girl who is held captive by a pedophile.

Inexcusable by Chris Lynch is about a boy who rapes a girl.

Hope Was Here by Joan Bauer is about a teen who joins a campaign to fight political corruption in her town.

I’ll be honest.  I don’t exactly like Living Dead Girl or Inexcusable but I think they’re doing something different and are worth a read.  LDG is extremely disturbing (so very disturbing, so very VERY disturbing), but I seriously could not stop reading it once I started.  Inexcusable is not even a very good book, and it left me with a feeling of incompleteness at the end (needed more something), but it’d make a good companion to Speak.  As for the other books, I’ve taught them, and my students have liked them.  Hope Was Here is probably the least depressing of the books just because it’s so gosh darned upbeat and uplifting even when it’s dealing with heavy issues, which is why I’ve included it on the list.

I also feel that any list of books about problem novels without a mention of Chris Crutcher, and specifically, Whale Talk is incomplete.  All of his books are, on some level, about abuse and its effects.

And then there are all of the other books that I’m not going to spotlight, but that I think fit this category.  So, a list: