I’m not much of a badass demon slayer.  Superheroes always have a cool origin story, but not me.  I’m not on a quest for vengeance or atonement.  I’m not the chosen one.  I’m just a girl who can see things that most people can’t.

Highway to Hell by Rosemary Clement-Moore is the third book in the Maggie Quinn series about, as the quote says, a girl who vanquishes evil because she has the gift of Sight.  In this book, Maggie and Lisa run across demonic hi-jinks in their quest to achieve that college ritual known as spring break. 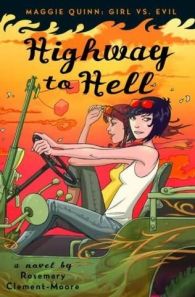 What I Liked
–    D&D Lisa owns my soul.  She is a fantastically complicated character.

–    Female friendship.  This series takes a great look at female friendship.  Lisa and Maggie’s relationship is so complex and has so many layers.  I love that they can call each other on any manner of b.s. but at the same time, we see Maggie’s hesitation to address certain things with Lisa because she knows her so well.  While their relationship isn’t tentative, it is still in a pretty fragile state because of the events of the first book and the fact that they’re in different places in their lives (literally—they go to different colleges in different states), so it’s clear that they’re still trying to understand all of the shifts in their relationship and how to relate to each other.

–    As always, the action is based on a ritual, but this time, they don’t get to take part in said ritual (like with the prom and the sorority), so it’s not the same story of the ritual being an excellent site for evil, so much as how/why they can’t be “normal.”

–    The setting is pretty fully realized.

–    The male characters are pretty ace as well.  And my favorite thing about them is that they’re not there to save the girls or point out how they’re wrong, but just to help because…

–    …everyone has his/her own area of expertise, so no one character knows everything.

–    I love that Clement-Moore doesn’t divorce religion from demon fighting.  At all.

What I Didn’t Like
I always like reading the books, but I usually feel like they’re just okay until I think about them more.  I don’t know why that is because they are so well-written, and I always enjoy the characters.  Maybe because the humor isn’t over the top?  Maybe because I don’t strongly identify with the fantasy/paranormal aspect?  I don’t know!  It’s a weird response is all.

Women Unbound?
Oh yeah.  This is all about the power of women, how they harness that power, how they use their power, and how sometimes women don’t quite understand the power and strength that they have.  Or sometimes that they do, but don’t want to quite unleash it or share it or let it go for whatever reasons.  Love this series.

In  conclusion: I really should own this series.  I like it that much.