The fact is, I had no love from my mother or my father from the beginning, from birth. But I survived. To tell the truth, I haven’t received a real love almost ever in my life, believe it or not. People look at me now and think what a hot life I must’ve lived–ha! I never found a real, lasting love. But I have survived. 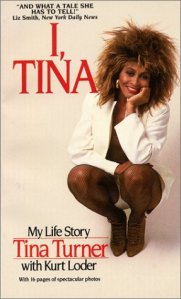 I, Tina: My Life Story is definitely a survival story. It details Tina Turner‘s life story in her own words (with some narrative help from Kurt Loder. Yes, that Kurt Loder), focusing on her youth in Tennessee, her rise to fame as part of Ike Turner’s revue, their terribly abusive marriage, her fall from fame, and then her career as a solo artist, which culminated in her being the oldest female artist to have a #1 hit.

The style of the book is certainly different. Unlike most memoirs, Tina’s is written in the third person with first person sections in Tina’s voice or her colleagues’ voices. And (surprise!) even Ike’s voice. So even though it’s definitely her story, it’s not exactly a memoir/autobiography the way I’ve experienced either before. The approach makes for interesting–and fuller–reading.

Before I move onto the content of the book, let me just say up front that it’s impossible for me to think about Tina Turner’s autobiography separately from the movie What’s Love Got to Do with It?. In college, my friends and I watched it practically every weekend, so much so that we knew the words to the movie and songs by heart. It had a profound effect on how I read the book and also how I’ll watch the movie in the future. So much left out! Some stuff that’s really, really important even.  So my review of the book will be tempered by the knowledge I have of the movie, focusing on what’s different.

Mainly, all I can say about the differences is that her life in the movie was bad, but her life in reality was much, much, MUCH worse.  It was basically terror-filled hell.

Here’s what I learned:

– Tina’s mother didn’t take her sister and leave Tina behind. Both she and her sister were left in the care of relatives until they each decided to join their mom in St. Louis at different times in their lives. (Tina, in fact, had several siblings, but she and Alline were closest in age.)

– Ike was not Tina’s first and only romantic relationship. She had a high school sweetheart, Harry Taylor, that she L O V E D and lost her virginity to.

– Tina was involved with someone else in the band (Raymond Wilson) before she and Ike ever got involved. In fact, Tina got pregnant by Raymond and they had a son.

– Ike and Tina were more like brother and sister when they started performing together. The first time she slept with him was more out of obligation than anything. (Ike initiated it, and she went along to get along. Definitely a sign of what was to come.) Both of them described the experience as weird/icky.

– Before they got involved he paid her for singing with the band, but after they got a record deal, he told her that he would pay her rent and keep the money for himself. They were romantically involved by this point and she was pregnant by him.

– Ike beat Tina before they ever got married. The first time he beat her was with a shoe stretcher in his office when she told him she wanted to go back to just being friends but would continue to work with him. She was pregnant by him at the time (he was still married, btw). He also made her have sex with him immediately after.

– Ike was involved with several of the women in Tina’s life. He would pick Ikettes based on who he wanted to sleep with. Once the women became involved with him, he would beat them as well.

– It was nearly impossible for almost anybody–male or female–to get away from Ike. He would threaten people and hunt them down if they tried to leave. He also carried a pistol at all times and had a reputation for pistol-whipping people. It was easier for him to control women, though, so most of the people who worked for him were women, including one of his ex-wives.

– He lost several band members because of his treatment of Tina.

– It took Tina a long, long time to fall out of love with Ike.

– After the drug use started, she says he became even more erratic and unstable, and the constant fear was even more constant. Where he used to do a slow burn and she could have days between beatings, she started to endure several a day.

– Tina’s closest friends were the other women in the group, most of whom were sleeping with Ike. How messed up is that?  Because her whole life was being on tour (Ike had them performing every night, basically), they were the only women she knew, and, because they were involved with Ike, they understood her situation very well.

– He stalked her terribly after she left him.

– Here is the one thing I am absolutely APPALLED that they left out of the movie, and that I think should have been addressed.  When Tina left Ike, she had to start over from scratch. That much is clear. What the movie doesn’t tell us is that Tina was responsible for paying back all of the no-show fees to the venues and promoters because she was the talent listed on the bill and who everybody was coming to see.  And she owed over $200,000 dollars.  So when she was doing the disco/cabaret performances, it wasn’t just to rebuild her image or jump start her career.  It was because she owed so much money, and she had to pay it all.  ALL OF IT.  Ike was not liable; she was.

– It took her over five years to re-establish herself as a viable artist. And she didn’t write “What’s Love Got to Do With It?”; someone else did.  But it was written FOR her to sing by someone not even aware of her situation.  And she was totally against it!  But they convinced her to sing it, and history was made.  So basically Tina Turner + “What’s Love Got to Do with It?” = MFEO.

Tina’s tale is a survivor’s tale. She talks about her transition from taking care of everyone else to realizing she needed to take care of herself.

The most surprising thing about the book is the humor. I’ve had the experience before of listening to women speak of their pasts, horrible though they may be, and laughing about it. My grandmother is a woman who does it. Tina is, too. She never makes light of her situation, but she’s able to see the ridiculous moments and find the hope there. Even when she talks about being depressed, she’s able to focus on the things, small though they might have been, that kept her going.

Though the book is hard to read at times, it’s a very satisfying read. I’m glad I read it.