The vamps were just too alluring. And their victims just never seemed to think they deserved better than the treatment they were given. It was almost as if they were afraid to put their foot down, because they thought they’d never get anything better…

Insatiable is Meg Cabot’s entry into the current vampire craze that, instead of taking a romantic vision of vampires, takes every opportunity to point out how vampires are, well, soul-sucking parasites who prey on those weaker than them, whose minds are easiest to be read and manipulated.

I wish I had liked this book more. Cabot and I are obviously on the same page with our hate of vampires. In her book (haha, LITERALLY, but that’s not how I meant it at first), there is nothing sexy about vampires except for the one vampire who has no interest in killing humans and instead wants to keep the whole vamp thing on the DL and foster positive vampire-human interaction. He’s supposed to be kind of sexy, but the reader is constantly reminded that he’s DEAD (or undead, I guess) and not a viable life partner.  Oh, and also that he has to lie about who he is in order to start a relationship, and even though he is badass, the fact that he’s a dead dude who feeds on the blood of humans. So he has magnetism and a ripped bod, but the whole vampire thing is not sexy at all. It’s creepy and causes way more problems than he’s worth. At least that’s how I read it.

Anyway, the reason I wish I liked this book more is that it could very easily be read as a metaphor for violent and imbalanced relationships. In fact, there are pretty explicit comparisons made between the vampires who feed on girls and abusive men. However, there’s just too much going on for it to be about that one thing. So much so that I can’t even figure out how to review this except to say that it was just kind of there.

Basically, I was interested in the book when I was reading it, but when I put it down, I had no interest in it whatsoever. There were no standout characters, and nothing really for me to sink my teeth into. (See what I did there?) I think it’d be good for a beach or pool read. Or a lunch time read that only requires lunch break levels of commitment. (Which is when I read it, which is why it took so long, and I finally had to just had to bring it home and read it after work Friday so I could be DONE ALREADY, GEEZ.)

Once we get home, we’ll have known what we’ve been fighting for. 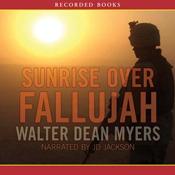 Walter Dean Myers takes on war again with his follow-up to Fallen Angels, Sunrise Over Fallujah. Sunrise follows Robin “Birdy” Perry through his tour of duty in Operation Iraqi Freedom.

The audiobook is narrated by J. D. Jackson.

– It took me a bit to warm up to the narrator but after a while, I really enjoyed his style. It was the moment I realized I knew which characters were speaking even before he got to the dialogue tags.

– Early in the narrative, Birdy says that his uncle Richie (the main character in Fallen Angels) wouldn’t recognize today’s army because of the women and the updated weapons. And I have to say, I appreciate the infusion of estrogen. Marla is probably my favorite of the secondary characters.

– I love the way Myers reveals details about his characters’ lives. Everything comes out organically and never feels forced or like a prescribed monologue.

– Jonesy the blues man. Shouldn’t work but it does. In some ways, he seems like a forced relic of the past (he wants to open a blues joint), but it was refreshing that he didn’t want to be a rapper or something, I guess. What can I say? His eccentricity grew on me.

– I love the details we get about the majesty of the buildings and, of course, I love the humanity shown in the people of Iraq. So many times Birdy says he doesn’t know who the enemy is, and it’s reinforced through the people he encounters–most of whom are not visibly “bad guys.”

– NEEDS MORE MAKING OUT.  Geez. Listen, I have known people in the military, and they hook up ALL THE TIME. I mean, there is a rule against it during boot camp. And you know what? PEOPLE GET AROUND IT! And I know that major making out isn’t WDM’s style, but still. I’m just saying. It would’ve made this book even more extra awesome is all.

In conclusion: War sucks. Walter Dean Myers does not.