Mr. Parke returns our writing. He writes on my paper that humor is wonderful, but I am using it as a defense mechanism to avoid confronting myself in a more substantive and honest way. He says I need to spend time reflecting on who I am and why I always cast myself as the victim in my life’s story. He sounds a lot like my mother. She’s been pushing me for years to see a therapist. 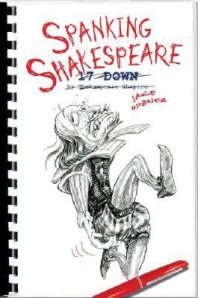 Spanking Shakespeare by Jake Wizner is the story of Shakespeare Shapiro, a kid who has a hard life because his name is Shakespeare. I mean, really. Isn’t that enough?

– This book is wickedly funny and smart. Shakespeare is one of those kids who thinks his life is so horrible, but he is really well-loved and has great, though embarrassing, parents. Wizner’s narration makes it really obvious that Shakespeare is able to find the humor in his life, but that he really doesn’t have for real problems. Part of that is done through the introduction of Charlotte.

– Great characters all around, actually.

– It’s no secret that I’m a great big lit nerd, so I found all of the literary references awesome. One of the girls Shakespeare has a crush on is a pretentious girl named Celeste, so he writes her a (funny) poem about all of these great authors, and they spend time talking about books and literature, and he’s all, “Is this how literary people flirt?”

– The situations in Shakespeare’s memoir are really funny and engaging.

– Unfortunately, the cleverness of the novel wears thin after a while. I thought the beginning was really engaging, but, by the middle, I wanted Wizner to get on with it. As the breakout quote says, Shakespeare needs to grow, but it takes FORever for him to do so. That said, I did like the end of the novel.

– I seriously feel like I read this book before. Maybe I read part of it and got bored by it? I had the weirdest sense of reading déjà vu after I hit the middle of the book. If I have read it and don’t remember it, that’s definitely not good.

– Really, this was a bathroom book. Which is kind of appropriate given Neil’s fascination with bathrooms. (Neil is Shakespeare’s best friend.)

In conclusion: A fun and funny book that loses steam around the middle but picks up again for a satisfying conclusion.