I guess it started in London, the night our dad blew up the British Museum. 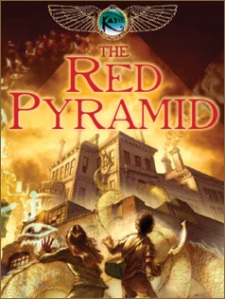 The Red Pyramid is Book One of The Kane Chronicles, Rick Riordan’s take on Egyptian mythology. Much like Percy Jackson, the two main characters, siblings Carter and Sadie Kane, discover that they have magical powers and are descendants of gods.

The audiobook is narrated by Kevin R. Free and Katherine Kellgreen.

– Awesome characters. AWESOME characters. You know the author is doing something right when you love a baboon that only speaks in grunts. Seriously.

– Speaking of awesome characters, I love Sadie and Carter SO MUCH. Just so much. I love their relationship and how they’re jealous of each other, but how they grow to love and trust each other. Not only that, but the way Riordan handles their personalities is A+.

– I also really appreciate the way race is handled in this novel. The kids are mixed (black dad/white mom). Carter looks like their dad, and Sadie looks just like her mom (i.e., she can pass). So part of the tension is that people doubt their authenticity as brother and sister or even that Sadie is a member of their family (mom is dead).

What I really appreciate, though, is that Carter deals with things black boys have to deal with–especially when it comes to appearance. His father is highly educated and talks to Carter a lot about the importance of how he presents himself through dress and speech. Carter also notes moments of being uncomfortable in stores and–not in these words–shopping while black. What I’m saying is Carter is an authentic black teen.

– Riordan knows how to drop some knowledge/facts without being boring. I learned a lot about Egypt and Egyptian mythology but didn’t feel like I was being taught a history/mythology lesson.

– I loved Kevin Free as a narrator for Carter. Kathleen Kellgreen was mostly good as a narrator for Sadie. I mean, she’s sufficiently British, so that really helped to differentiate the voices, but…see next section for more.

– As I hinted at above, I liked Kellgreen as a narrator–mostly. However, sometimes Sadie sounded completely frantic for long stretches of the narrative. I mean, yes, the stakes were high and things were moving quickly, but I don’t want my narrator to actually sound like she’s dialed up to 10 the entire time.

I listened to this with my daughter, and she pretty much hated Sadie’s parts and couldn’t wait to get back to Carter’s sections in the book.

– This book is TOO LONG. I love that Riordan packs so much in, but the book seriously started to drag in the middle. Yes, a lot happened; yes, it was exciting. But it was exhausting. The good news is that the book picks up again near the end. However, I still felt the need to take a break from it and wanted to hurry up and get to the end.

In conclusion: I did like this book a lot, but the length and some of the narration kept me from loving it. That said, I can’t wait to read the next book in the series.