I can’t keep doing this to myself: getting my hopes up so high, only to have them come crashing down. I can’t keep waiting for him to come to his senses, having my whole emotional state rest on what he decides. What if never wakes up to how perfect we’d be together? What if I spend another year pining for him–or longer even? 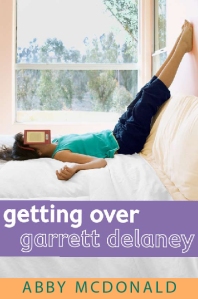 In Getting Over Garrett Delaney by Abby McDonald, Sadie is in love with her best friend Garrett. When he goes away to camp for the summer and falls in love with yet another girl who isn’t Sadie, Sadie realizes it’s time for her to move on.

– I love, love, love, LOVE that the women Sadie works with band together to help her get over Garrett. In that way, the story becomes all about female friendship. To which I say YES PLEASE.

– Awesome female characters. Between Sadie (who is, of course, kind of annoying in the beginning because she is so wrapped up in Garrett), Kayla, LouAnn, Dominique, and Sadie’s mom, fantastic women abound.

– Sadie does not get over Garrett by getting a new boyfriend!!!!!! YESSSSSSSSSSSSSSS. Nor does she need a boy to show her the way to enlightenment. It’s all about her, her female posse, and her mom.

– The format is ace. Once Sadie gets for real about getting over Garrett, there are little self-help type chapters between the main action to preview what Sadie is working on, and the progress she’s making.

– The emphasis on discovering your own interests and figuring out what you like and who you are outside of your friends–male or otherwise.

– Dominique, the black character has an Afro. Yay for natural hair.

– Literary references abound in this book. So much so that I started keeping a list of authors/books mentioned throughout. The books/authors (that I caught):

– Because navigating relationships always involves compromises, there are no easy answers or black and white situations. McDonald addresses that through the characters without being preachy or condescending and by letting them work through the answers themselves. The key is, according to the book, to know yourself and then you can know your boundaries.

– I thought the ending was a little abrupt. It’s not a bad ending or anything; I just wanted a little bit more. Which is also a good thing because it meant I wanted to spend more time with the characters.

– Dominique, the only black female character, is bitchy. She’s also French, so her bitchiness may have more to do with that than anything. At least she wasn’t sassy, I guess.

In conclusion: Very solid contemporary YA. Realistic and believable characters with a good, non-preachy message.