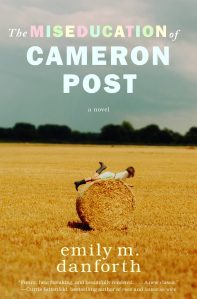 The Miseducation of Cameron Post by Emily Danforth is the story of a girl who lives in a small town in Montana during the 1990s. She’s being raised by her aunt and grandmother after the death of her parents. Oh, and she’s gay.

– The setting. I’ve never read a book set in Montana before, and I got a clear sense of not only Cameron’s town but the state as well.

– Cameron’s grandmother is such a great character. I also love, love their relationship. I’m probably more upset at Aunt Ruth coming and disrupting that than anything else.

– Jamie! I love Cameron and Jamie’s relationship. They’re best friends, and they get each other. I love their competitiveness and how possessive they are of each other. But more than that, they’re honest with one another (as much as they can be, really) and understand each other so well. Not only that, but Jamie’s just so great on his own, and I love him.

– Danforth’s portrayal of how a lot of teens relate to church and their youth group. Cameron is not particularly religious, but Aunt Ruth is, so when Ruth joins the church she brings Cameron along. While Cameron may not necessarily connect to the church as a whole, she does enjoy the youth group because, of course, all of her friends (including Jamie) are there. Of course, she and Jamie love to drink and get high together, but that’s beside the point. The point is that she does find a sense of belonging with the group, even if she’s not embracing religion (particularly Christianity) as fervently as Aunt Ruth wants.

– Once Cameron gets shipped off to Promise (a gay deprogramming camp/school), she meets some fascinating characters. Just…amazing. She befriends Jane and Adam—two characters fascinating in their own right—but encounters quite a few other characters who I wanted to know so much more about: Erin, Dane, and Mark.

– I believed all of the relationships Danforth set up. So many of them are complicated and messy, and I enjoyed seeing how they all played out and where they all led.

– This book is like two books in one. Part one is Cameron dealing with the death of her parents and her feelings for Irene and then Coley. Part two is Cameron’s experience at Promise. I feel the book would have been better served if it had been split into two separate books so each could be its own complete experience.

– Remember I said that there were a lot of really interesting characters at Promise? I think the second book (or part two of the first book) would have been waaaay better if it had been presented as a collection of short stories from the different characters’ points of view. I really wanted to see Promise through their eyes.

Part of that comes from the fact that Cameron is just a little too cynical/detached as a narrator for me to get a clear sense of the other students’ experiences. Plus, let’s be real, Cameron is kind of boring and they’re kind of not.

So what I’m saying is, I thought Promise deserved its own book.

– Honestly, if I weren’t reading this for my book group, I would’ve stopped about a quarter or halfway through because of the dragging and the lack of things happening.

– I didn’t really care for the ending. Bah. I mean, elements of it were fine; I just didn’t completely buy it.

In conclusion: I wanted to like this way more than I did. I have so many mixed feelings about this book. The stuff it did well was done really well. The things I didn’t like, I really didn’t like. So, you know. Mixed feelings.