“I know this sounds cruel…but grieving people are selfish. They won’t let you comfort them and they say you don’t understand and they make you feel useless when all your life you’ve been functional to them.” 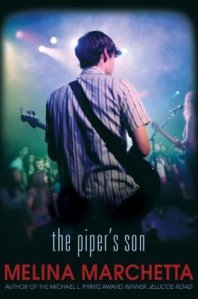 The only thing I can say that’s not entirely positive is that I didn’t love it as much as Saving Francesca, but I still liked it a whole bunch. So! Here are some of the things I dug:

– Well, it’s Melina Marchetta, so nothing is easy for the characters, and she’s dealing once again with grief. This time, though, the impact spreads beyond the immediate family, and we learn what effect the death of an uncle has in a supremely close-knit extended family.

– The narrative alternates between Tom and his aunt, something I wasn’t expecting. At first I found it a little weird, but then, well, see first point.

– I loved that the story is about three couples estranged in different ways. I also love that all three of the couples are high school sweethearts.

– The relationships are so complicated and complex. That said, I understood how and why all of the characters relate to each other the way they do.

– I loved that we learned more about the dynamic between Frankie and Tom’s friendship group and what they were like in high school and beyond.

– I think I said this in the Saving Francesca review, but Marchetta can paint a whole picture with a sentence. There’s this one line about Tom that told me everything he had been doing for months without Marchetta having to spell it out and explain. I don’t want to spoil anything, so I’m not going into detail, but I just loved it so much.

– Again, a story about a family that loves fiercely, even if it isn’t perfectly.

– Oh gosh, and that one exchange between Georgie and Pop Bill. Just wow.

– Okay, and my absolute favorite thing about this novel is the way friendship and love works. It’s not saying the right thing. It’s not doing the right thing. For the most part, it’s just BEING THERE. I mean, yes, the characters call each other on their crap and they all have breaking points, but at the end of the day, everyone is given the space to figure out what they need and their friends/family are just there. And that’s enough.

– And the best, best thing: the book is truly a standalone novel. You don’t have to have read Saving Francesca to understand or get it. Of course, you would want to. But you don’t have to.