I haven’t written a proper review since October?! That’s just not on. Especially considering I have read a ton of books since then. Me and this blog have a lot to hash out in the next few days/weeks. In the meantime, here are some mini reviews. 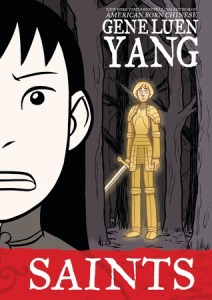 1. Saints by Gene Luen Yang – This is half of a two-part series about the Boxer Rebellion in China. I thought the two books would come in together, but I guess whoever had the first book wasn’t done with it. I was planning to read them as a set, though.

What I liked about this book is how small in scale it is, even though it deals with a huge conflict. Saints follows Four-Girl as she discovers Christianity and leaves her family’s home. I really liked that she is not really directly engaged with the rebellion and is instead just trying to figure out her place in the world. The rebellion does directly touch her life, but the focus of the novel is on her day-to-day struggle to fit in with her family and community. So often stories about war are, you know, about war, so that was a pleasant surprise. Another unexpected and interesting approach Yang takes is with regards to Four-Girl’s conversion to Christianity. It’s less about spirituality and more about protection and rebellion. As far as the art goes, the graphics are delightful as usual. I love Yang’s artistic style.

2. Aya: Life in Yop City by Marguerite Abouet (illustrated by Clément Oubrerie) – It took me a little while to get into this slice of life graphic novel set in the Ivory Coast during the late 1970s–mostly because the artwork inside the novel isn’t quite as detailed as the cover, so that was disappointing. The novel also doesn’t really have a clear plot right away; it mostly establishes the setting and relationships in the beginning. Once the relationships and setting are established, the drama starts to pick up, and I became much more interested. The main takeaway of course is that people are the same everywhere. Some of the cultural mores are different, yes, but, in general, Aya and her friends/family deal with family, work, and societal drama. There’s a “who’s the daddy?” plot, a plot about a boy who disappoints his father, several plots about infidelity, etc. I mean, you know, the usual. By the end I was engaged, but I’m not necessarily interested in picking up the next part of the collection.

3. The House of Hades by Rick Riordan – I continue to be delighted by this series and by Rick Riordan. The best part of this book is that all of the demigods get a chance to narrate so the story feels more balanced, and a lot of character development happens. I have to give Riordan props for anticipating my needs/wants as a reader as well. At one point, I found myself thinking, “Man, I really miss [specific character]” and then that character showed up within a couple of chapters. I also started getting annoyed with how heteronormative all of the characters/relationships are, and then he introduced a gay character. So I have much respect for Riordan as an author based on those two instances alone. Also: plot, characters, etc. I’m also starting to warm up a lot more to the characters I didn’t feel a proclivity towards, so that’s nice as well. I’m looking forward to seeing how everything shakes out.

I did read more books than the three featured here, but I’m trying to figure out the best way to discuss them. Mostly, with them, I’m concerned with certain patterns or trends I noticed, so they aren’t really fit for typical reviews, I think. We shall see.