I listened to The Red Pyramid by Rick Riordan a while ago, and enjoyed the book but found it a little long and fairly complex. So I was really interested to see how the book translated to the graphic novel format.

To start, the illustrations (by Orpheus Collar) are gorgeous. GORGEOUS. The colors are rich and detailed, and the characters look pretty much exactly as I expected. The pictures/colors also match the mood of the story: dark when appropriate, hazy and dream-like when appropriate, and, of course, bright and fun when appropriate.

The action scenes in the original novel are fairly complex, so they are well served by the graphic novel format. Events that take pages and pages of description are finished in one or two pages. The same applies with magical transformations or acts. They took a lot of description in the book but only a few panels in the graphic novel.

So that was great.

While I enjoyed reading this as a graphic novel, I found that the racial politics of the book were lost in translation, and that was a huge letdown.

There’s no ignoring that Sadie and Carter are brothers and sisters who, on the surface, don’t look alike. (He’s brown-skinned and she can pass for white.) This is a point of real tension in the original novel that is only briefly touched on in the graphic novel. In fact, it only comes up once when their dad introduces them to someone he works with at the museum.

In the book, that difference is a much bigger deal. For example:

In the graphic novel, those details are lost. There is zero mention of Carter’s relationship with his grandparents and/or how he feels rejected by them. At the end of the book, Carter mentions his dad would think Carter is dressed “like a hoodlum.” However, there’s zero mention of why, nor is there any mention of why that’s a big deal. 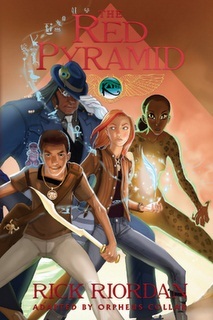 Another huge part of the story is that Sadie and Carter have lived apart for a long time, and they’re very wary of each other and have to learn to trust each other. They’re jealous of each other’s relationships with the other members of their families, and they both find each other tiresome in very complicated ways–mostly because they don’t know each other very well. Those complexities, too, get lost in the adaptation.

Oh, and a lot of the humor was lost. So, that sucks.

I feel like this review is reading negatively, and that’s not my intent. I really did like the graphic novel. However, I did read the original first, and it’s hard not to notice that so much of what I liked about the novel is missing here.

That said, I think the graphic novel is an awesome introduction to the characters and the series, but I would definitely recommend that anyone who enjoys it also check out the original novel as well. All in all, the graphic novel is a solid adaptation because the general outline of the story and the excitement are there. But, for nuance and humor, the original really is superior.