If you’re totally into kissing books (WHICH I AM), you might like this book. As the title plainly states Kissing Ted Callahan (and Other Guys) by Amy Spalding is about main character Riley and her quest to kiss Ted Callahan..and finding some other guys to kiss along the way. 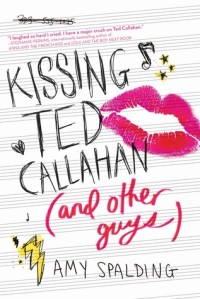 This book was a lot of fun. Riley and her best friend Reid are both totally dedicated to taking their crushes out of fantasy land and making them a reality. They have different ways of going about it, of course. Reid pretends to be interested in getting a dog, and Riley’s tactic involves giving her crush (Ted Callahan, of course) a ride as often as possible.

Which…now that I think about it is totally something I did as  a teenager. Ha!

I wish I had a lot more to say about this book, but most of the charm is in the voice. One of my favorite passages is Riley’s discussion of why she has decided that, though she and Reid are friends, she’s not interested in dating him:

His hair is better than it used to be, but it’s boring brown and fluffy like a baby chick’s, and that’s not the kind of hair I go for in a guy.

In fact, that passage highlights one of my favorite things about Riley. She’s quirky but not in an obnoxious way. She’s super into boys’ hair–not their eyes, which is typical–and she’s also a drummer, so she constantly thinks of how things are or are not rock and roll. She loves music but isn’t superior about her interests. She’s a lot of fun.

While the story is told from Riley’s point of view, some of it is in Reid’s voice because they have a shared journal where they write their dating experiences called the Passenger Manifest (shout out to Lost!). His entries are great because he suffers from a lot of anxiety, and instead of Riley just telling us how he constantly stresses over everything, the reader actually gets to see inside his head and see how he thinks.

Also, this book deals with female friendship (one of my favorite topics!) in an authentic way. Riley and her best friend are estranged, though it’s mostly one-sided on Riley’s part. Except…they can’t really be estranged because they’re in the same band, so Riley can’t avoid Lucy no matter how hard she tries. While I would have liked them to not be estranged, it works for the narrative and actually shows how important their friendship actually is.

I feel like I’m making this book sound boring, and it’s totally not. It’s all about friendship and kissing and boys and hair, and it’s fun and sweet and has regular teens doing regular teen things, which is all A++ in my book.

Oh! And I like the way dating is handled in this book! Riley goes out with a couple of different boys and her experiences with each one is different. Lots of kissing, obviously, but also lots of different ways of looking at the world and connecting with people on one level but not another. I like that even though she has a crush on Ted, she doesn’t spend the whole book pining over him. And I also really like the way that Ted moves from a concept to a person once she gets to know him better.

It’s hard to find fun books, and this hit all the right notes. I smiled through the whole thing and was completely satisfied with the ending. So. There you go.

Source: ARC from the author