I’m supposed to be writing up my yearly self-evaluation, so now seems as good time as any to write a blog post.

1. I continue to be in love with The Good Place. Jason Mendoza is the dumbest person alive (well, dead), and I may love him for it. Also, he died in the most Florida Man way possible. I mean, seriously. I can see the headline (highlight to read because spoilers): Florida Man Suffocates to Death in Failed Robbery Attempt. I laughed, but also: Jason. Seriously.

So much props to the writers/music people for using *NSYNC’s “Digital Get Down” at the end of the previous episode, btw. Perfection.

2. I abandoned Swing Time by Zadie Smith for the time being. It was just taking too long to get going. I did, however, put the audiobook on hold because I think the narrative might be better suited to that form for me. I am interested. It’s just not keeping my attention. 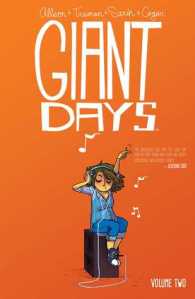 3. I just started Giant Days by John Allison after trying–and failing–to get into Black Panther (yes, the Ta-Nehisi Coates one). I am also having trouble gaining traction on any novels, so a graphic one seems like the best way to go. Anyway, Giant Days does what I love: regular teens/young adults doing regular things. It’s also told in episodic vignettes, which is a thing I dig.

4. My daughter has been after me to read Water for Elephants since last year (so dramatic! Last year = November). So that’s currently all up in my eardrums (translation: audiobook). No surprises here but I totally prefer old Jake to young Jake. What can I say? Old people and teenagers are my favorites.

5. Oh, so this is a thing that has happened: I checked out this book from the library, lost it, found it, and promptly lost it again. IT IS DRIVING ME CRAZY. I know it is in my house somewhere, but I cannot for the life of me figure out where it can be. ESPECIALLY since I brought in with all the other library books and have those in a neat stack. Where did it disappear to? How? My mistake was not immediately returning it to the library when I found it and instead thinking I could actually read it. Because it’s not like I would lose it again or anything. UGH. WORST.

6. I officially decided yesterday that I’m going to the Women’s March. Not the local one, but the big one in D.C. The past two days subsequently have been a whirlwind of ordering stuff off of Amazon in preparation (God bless Amazon Prime, seriously). Most importantly, I couldn’t find a proper jacket in town (which is dumb because it actually gets cold here–I’m talking below 32˚ each winter), but whatever. I have one now. Also, I wish I had decided in time to buy my metro card in advance. Bah.

Now I just need to figure out what books I’m going to listen to on the loooooooong bus ride there. Cross your fingers/pray/wish/hope/dream that it doesn’t rain that day. Sunshine would also be pretty awesome.

7. All these grown-up books means I’m linking up with The Book Date this week. Happy reading, everyone!

7 thoughts on ““I was a professional amateur DJ.””