It’s time for the spring Must Read check-in!

So far, I have attempted 10/20 of the books on my list. In fact, I’m currently reading Long Way Down by Jason Reynolds, which technically brings me to 11. 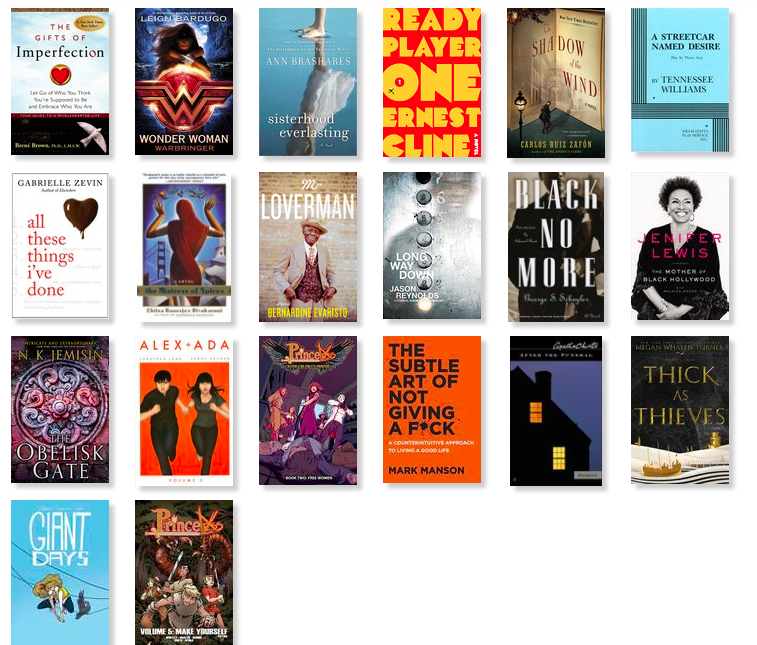 Here are the reviews of the 10 books I’ve attempted so far:

Yeah, so this is the book that I think really predicts the current president and his administration (yes, even more so than 1984, A Handmaid’s Tale, and Parable of the Sower). Schuyler imagines a post-racial America (what if black people turned white and therefore had access to all the things they were previously denied because of their skin color?) and then shows what really drives racism. (Hint: it’s capitalism–and the desire for power.) He also, of course, shows what we already know: there is no actual difference between white and black people except that some of us think we’re superior to others of us.

Schuyler eviscerates everyone who benefits from racism, including black intellectuals and, of course (and especially), politicians. The ending is funny and perfect, but the ending before the ending was heartbreaking and hard/uncomfortable to read.

Read Harder 2018, Task 9: A book of colonial or postcolonial literature

The Mother of Black Hollywood: A Memoir by Jenifer Lewis

I listened to the audio version of this, which I highly recommend. It’s like sitting in a room with her while she tells you her story. Plus, she sings! So that’s fun.

I appreciated Lewis’s honesty here, especially as she spoke of her sex addiction and bipolar disorder. I *loved* all the stuff about how she came to terms with her childhood and how she learned to forgive her mother. The story about the white man coming to the door and insulting her mother? WHEW.

Lewis makes liberal use of the f-word and isn’t shy about detailing her sexual history (there’s a chapter called “Dick Diva,” for example). If these are things that may offend you, probably don’t read this. But if you want a brutally honest account of working in show business while learning to accept and manage a mental illness, then definitely check it out.

Also, I totally want to hang out with Jenifer Lewis and Brandy. How do I make this happen?

The Subtle Art of Not Giving a F*ck: A Counterintuitive Approach to Living a Good Life by Mark Manson

Made it to pg. 60 before it was time to go back to the library. I haven’t decided yet if I’ll go back to it.

12/19/17 – about halfway through chapter 6 (“The Art of Relationships”) on audio. will pick it back up in print form since I’m not going to finish before I have to return it.

2/2/18 – So I either keep picking this book up at the wrong time or it is just not for me. I’m going to have to set it aside AGAIN because I am not feeling it right now. I really do like the voice and characters, though, so I am going to just assume I am in a ~mood~. Made it to pg. 140 this time.

After the Funeral: A BBC Radio 4 Full-Cast Dramatisation by Agatha Christie

The best part of this book is during the big reveal when Poirot says they need to start from the beginning and the one dude is like, “Why are you like this? Why won’t you tell us who did it?” and Poirot says, “Because this is my way.” I laughed out loud.

This is a reread, and the radio dramatization was a fun way to revisit the story. I love a full-cast audio production. The only problem with this one is that there are a lot of characters to keep straight, and they aren’t always identified, which means that often I wasn’t clear who was speaking or what their relationship was to the murder victim. There were also times that it wasn’t clear exactly where the action was taking place, especially in the beginning.

I chose to reread this because I remembered how the murder was solved and that there was a country house involved, but that was it. Christie plants the clue right from the beginning and I felt very clever that I picked up on it (even though I already kind of knew the end). So that’s a good way to make yourself feel smart, basically.

The story is definitely five stars; narration/performance is probably about a 3.5 just for the clarity issues.

So I like this series (badass teen girl pirates? With an emphasis on different kinds of strength? I mean), but I found this particular volume hard to follow–mostly because there’s a huge section where the drawings are dark so it’s hard to make out the images. Also, there are a LOT of girls to keep up with, and Whitley isn’t good at having them addressed by name most of the time. So while I can see the differences between them, I can’t remember who is who.

As for a slight spoiler: I did love that the two teams with less brute strength/fighting skills were more successful in warding off/defeating the bad guys because they used science and strategy. It was a nice counterpoint to the insistence that they all learn swordfighting.

A solid entry in the series, but needs a little more clarity.

This series just continues to be such a delight. It’s episodic vignettes and real life teenagers doing real life things and the stakes are all emotional and not world ending (though, of course, they feel that way to the characters), and it just makes my heart happy.

(I still wish Susan didn’t smoke, though. Because I think of her as my friend, see?)

Also, there was a teen mom in this one! *heart eyes emoji*

Ready Player One by Ernest Cline

Tapping out at chapter 12 of the audiobook.

I heard a lot of good things so was excited to read this, but it’s just one huge info dump and none of them are handled with any finesse. (Do I really need a biography of every single person involved with the creation of OASIS? No.) Also, I’m not really into reading about people playing video games since I’m not all that keen on watching them play video games.

I also heard great things about Wil Wheaton’s narration, but really, he (the character and Wheaton both, honestly) just comes off like a smug asshole.

So this one is just not for me.

The Shadow of the Wind by Carlos Ruiz Zafón

This book is beautifully written and narrated (audiobook), but I’m over an hour in and bored out of my mind.

1. The Gifts of Imperfection by Brené Brown

7. All These Things I’ve Done by Gabrielle Zevin

8. The Mistress of Spices by Chitra Banerjee Divakaruni

10. Long Way Down by Jason Reynolds

Next check in is Sept. 6. Maybe I’ll be done with every book on the list by then. Fingers crossed!