I’ve finished a couple of books these past two weeks (more on that below), but the one that’s had the most impact so far is Syllabus: Notes from an Accidental Professor by Lynda Barry. In fact, the book has inspired two activities I did in my class the past two weeks. 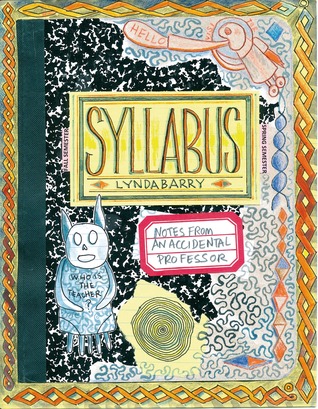 Activity 1: We’re working on poetry and some of my students submitted their pieces for feedback. I found myself making the same comment over and over (needs more imagery!), so inspired by Syllabus and “Variations on a Summer Day” by Wallace Stevens (snippet here), I came up with the following activity.

I assigned each student a stanza of the poem and told them to draw what was happening in each stanza, line by line. The focus here was not on making fine art or a gallery painting of the poem, but rather whether or not they were able to create a picture from the words the author used for the poem. And if they didn’t know a word, they had to look it up. (This was also a good teachable moment about the difference between Googling the meaning of a word and looking up the definition in the dictionary. A web search for “timothy,” for example, will tell you that it’s a boy’s name. Going to m-w.com will tell you it’s a type of grass. Guess which one the poem was referencing?)

Then, I had the students get into groups and discuss the poem and images. The point of the exercise was that they were able to draw something for pretty much every single line and definitely for every single stanza.

Next, as a revision exercise, I had them choose one of the poems they’ve written so far this semester and do the same thing: draw an image for each line based on what they had written. One cool thing that came out of it is that one student drew an image and when I pointed out it wasn’t supported by the language in the poem, I encouraged him to see how he could put those details into the poem, which I then, of course, told his classmates to do if they also found themselves drawing a picture that wasn’t there. “Obviously,” I said to them, “that’s the picture you want the audience to see, so let’s make sure they can.”

ALSO, today that student showed me two more poems and they were chock full of imagery. Win!

Activity 2: This activity was also inspired by Syllabus–okay, inspired is underselling it. I just stole it straight from the book.

Today was memoir day and our model text was “If You Are What You Eat, Then What Am I?” by Geeta Kothari. In Syllabus, Barry has her students do a memory writing exercise where she asks them to focus on one word (“car” for her; “food” for us) and write down the first ten memories that pop up around that word. Then, they pick one memory, write the name of it at the top of a new page, and answer a list of questions. After answering the questions, the students then turn to a clean page and write up the memory using first person present tense.

What can I say? It went well.

Activity 3: The other cool assignment I had them do after reading Mike Sonsken’s work (which is mostly about Los Angeles) is have them write their own place poem (i.e., a poem about a specific place). Since all of Sonsken’s poems we read also included history about LA, I sent them off to the library to research the place they were writing about. So a place poem that incorporates some history about the place.

So you know. I’m feeling pretty good about myself.

I finished three books this past week:

Anne of Green Gables: A Graphic Novel by Mariah Marsden

This is a fine introduction to the story if you don’t know it. But as someone who is intimately familiar with the miniseries and has read the original novel, any version of Anne of Green Gables that doesn’t make me (view spoiler)[(a) desperately want for Anne to make up with Gilbert because the ship is so real or (b) want to cry actual tears when Matthew dies (hide spoiler)] is decent but not great.

Also, Anne’s eyes freaked me out in the first close up of her face. So.

Syllabus: Notes from an Accidental Professor by Lynda Barry

Welp, this book influenced my current class before I was even done reading it, so four stars for that alone. This would be five stars but at times–because of the layout–some of the ideas were a little difficult to follow. Lots of good activities and things to think about here.

Also, I wish I could have taken one of Barry’s classes.

Well, this was delightful, and I especially appreciated Kamala trying to make her life less complicated by making it even more complicated. 100% relatable content.

I am starting to get worried about Kamala’s costume, though. I keep thinking her scarf is going to get caught in something and strangle her.

Ack! I’m running short on time to get this done before Monday is over, so here are the two books I’m currently reading:

I’ve been making my way through The Writing Diet by Julia Cameron because I’m working on losing weight and creativity is still a struggle. Sigh. And I needed something fun to read and I’m trying to finish the Read Harder challenge, so I started Betsy-Tacy by Maud Hart Lovelace. The reading summer slump continues because, though B-T is super easy, I keep finding myself feeling like it’s still too much. But it is easy! And delightful! So I shall keep on.

One thought on “It’s Monday & Syllabus has eaten my brain”