1. I’m listening to my daughter and her friend talk about building their Dungeons & Dragons game and is the nerdiest thing ever. However, super props for the level of planning and storytelling that goes into being the Dungeon Master (which her friend is).

2. Last week was full of car adventures. First, I ran over the curb entering the parking lot before we went to see the Mr. Rogers’ documentary (which is awesome–go see it). Then, I hit a parked car when I went to therapy. The good news is that both sounded way worse than they wound up being, I didn’t blow out my tire when I ran over the curb (which has definitely happened before), and I didn’t do any damage to the parked car (it was actually a van with a huge rubber bumper). The bad news is that now I have a scratch and small dent on the passenger side of my car.

The funny news is that I hit a parked car with the car I used to have so now my current car has a matching scratch. I am nothing if not consistent. 😂

Anyway, the lesson here is to just relax when I’m running late because otherwise I just cause a lot of damage. And to only back into spaces when parallel parking because my depth perception for pulling into a space is clearly all off.

3. I have officially finished my low FODMAP elimination and reintroduction diet. And the result is that I basically have to keep following it because I had a reaction to every single FODMAP except for whatever category dates are in.

When I think of how I so naively sat in the doctor’s office telling her how I didn’t understand how I could be so sick when I was eating what I always ate, all I can do now is laugh. THE ANSWER WAS IN THE QUESTION ALL ALONG.

But yeah, anyway, that sucks because I loved almost all of those foods. But I love not feeling like crap 99% of the time more.

4. Speaking of food, I had a peanut butter and jelly sandwich for the first time in months about two weeks ago, and it was such a joyous experience, I cannot even tell you.

Oh and last week, I had Chinese takeout and almost wept. So, basically, it’s nice to be back to what is now my new normal.

New normal because I definitely have to use sourdough bread for my sandwich and use grape jelly instead of strawberry preserves and have to double check all the ingredients in the takeout, so you know. Different but the same.

5. Summer school is over in one week. I am so ready for my three weeks off. Except my fall courses are not prepped. Oh well. I tried.

Also, shout out to my student who helped me figure out what to do with the script I’ve been revising. “I learn as much from you as you learn from me,” I said to her.

6. OMG! So I lost my book that I was reading while I was reading it, and this has happened to me before, and it is always so frustrating. Basically, it was on my bed and then wasn’t on my bed. But wasn’t around my bed or under my bed. Or in the living room. Or other rooms in the house. SO WHERE WAS IT?

I checked under my bed again a day later and there it was. So I just think the shoemaker’s elves stole it to read and then returned it the next day.

This is super cute and obviously about female friendship so that makes me happy. I love the focus on storytelling and imagination here and that the girls are treated so seriously. I also appreciate that there are these little threads that run throughout with actual payoff. 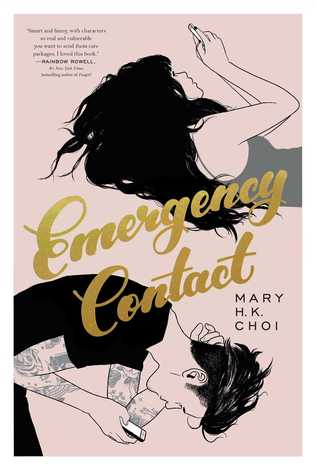 (Okay, because this is the driving me nuts: the book covers are actually the same size, but the one on the right has a white border, so it looks smaller. Just so you know and as a reminder to self when I see this later.)

I’m still making my way through Julia Cameron’s The Writing Diet (allllllmost done). It’s problematic but has some good stuff in it. I”ll talk about both in my review.

I started Emergency Contact by Mary H.K. Choi when I was at the nail salon last week so am about halfway through it. I’m digging it so far.

9. I finally caught up on Brooklyn Nine-Nine so have thoughts about that. Maybe–maybe–I’ll even put it all together into a blog post. I may try to finish Black Lightning next. It was stressing me out during the semester but maybe now that I’m in summer mode, I may be able to handle it. We’ll see.

10. Last week, I went paddleboarding for the first time and did so for two hours. I also fell off the board twice–once trying to get back onto it after we sat on a dock for a short break, the other time trying to get off the board at the end. I wouldn’t have fallen the second time if I hadn’t hit the dock (which sounds worse than it was). Basically, I couldn’t turn my board in time so once it hit the dock, I lost my balance and it was a wrap. All in all, though, I had fun and would do it again.