Ugh, allergies are kicking my butt. But I will not let them keep me from writing this post.

First, I am writing this while I attempt to make waffles on my new waffle maker. I am not off to a good start as I misread the waffle directions because the numbers were blurry. (I though it said 1 1/2 cups for both the mix and the milk, but it said 1 1/3 cup and 1 1/4 cup, respectively.) Does this mean I have to start wearing reading glasses? I think this is definitely a writing on the wall situation.

Okay, maybe not Pacey’s writing on the wall to Joey situation, but still.

Second, TV has been very good to me this past few weeks.

1. The Making It finale was perfect, minus the wedding of strangers bit and that we never heard what they thought of what the crafters made for them. More importantly, it got renewed! Ah, such good news.

2. The So You Think You Can Dance finale was ALSO perfect. I would have been perfectly fine with either of the top two winning so that was aces for me. Plus, I got the opportunity to give my friend a rundown of where Slavik and Gennessy fit in the hip-hop dancer paired with contemporary dancer ranks and why if it had been a traditional top 20, he may not have made the final four. I may or may not have also talked about where they fit in the couples with insta-chemistry ranks, but if not, we can have that discussion another day since it’s obviously something I have very strong thoughts and feelings about.

3. I also caught up on the last three eps of Insecure, which were pretty ace. The Coachella episode had me hollering laughing.

Okay, I took a break to eat, but then I got distracted by this Aretha Franklin tribute from Black Girls Rock 2018.

It is magical. WHEW.

As for an update on my waffles, they were quite a bit stodgy, which is a nice segue into the other bit of TV news that has made me happy:

4. New episodes of The Great British Baking Show are on Netflix! This is particularly exciting because I had just finished watching the last Mary Berry, Sue, and Mel season on PBS a couple of weeks ago. Back to back GBBO!!! So delightful. So, so delightful.

I do miss hearing Mary Berry say “layers,” but otherwise I like the new group. Noel’s fashion choices delight me, and I LOVE LIAM SO MUCH. I hope he makes it to the final. He is aces.

I have also decided I would like to incorporate “Oh my days” into my everyday speech because a couple of the bakers say it. Remind me of this.

5. Then, on top of that, I finally watched To All the Boys I’ve Loved Before on Netflix, and it was practically perfect in every way.

The only thing I wish they had shown more of is how upset Lara Jean was about the video. The movie glossed over it, but she there were a lot of tears in the book. So. Other than that, though, perfect.

I know I have mentioned before that I listen to gospel as background noise when I’m puttering around the house (or writing blog posts, apparently). Well, since I no longer have cable, I have been relying on YouTube, which means I am finally seeing the people singing the songs I was listening to on the music channel. I am currently enamored with these two videos.

What I love about this video is how they look at each other when they’re singing or hitting notes. You can tell they get along really well and love working together. It just warms my heart. I mean, the song is good too, but that fade out and then fade back in at the end and Tasha’s “YES!” just makes me happy.

I had no idea this kid was 19 before I saw the video because he sings like a 35-year-old man. So when I saw him in those glasses and overalls, I was just tickled. Again, I like the song, but the video delights me, especially when he throws his glasses at some point.

Also, since quite a few of these videos have crossed my YouTube these past few weeks, I have to say I much prefer the gospel videos that are them singing live (or recording in the studio) since they’re more authentic than the videos of the singers making R&B/pop singer faces and standing in front of a green screen or whatever. Or having dancers.

I mean, I like the song “Won’t He Do It” by Koryn Hawthrone but the video feels a little forced to me. WHERE IS THE STORYLINE? (I like stories.) If there’s no story, just let me see you do a more authentic staged performance is all I’m saying.

Also, I read some books:

I know this is supposed to be a critique of how reality TV can desensitize us, but I really feel like it could be about most gruesome entertainment. I do think the treatment (and knowledge) of reality TV being mostly scripted contributes, but this is scary in its voyeuristic possible realness. Also, I hate that the only way to critique these types of things is to participate in them. Sigh.

Anyway, this was really engaging, and I read through it pretty quickly. My only complaint really is that the forums/message boards/Tweets were after every one of the first few chapters but then were spread out sporadically through the rest of the chapters, and I really was expecting to hear from the gallery at the end of each and was looking forward to it (how’s that for a commentary on our social media/message board culture?) so was disappointed that they were not as frequent as earlier chapters.

Other than that, I was surprised that I enjoyed this since I am not in a murdering place with my entertainment and this was set on a murder island, so take that as you will.

All Summer Long by Hope Larson

Well, this was a delight. It’s super slice of life, which I love, and it’s about navigating friendships, which I super love. Love the artwork, and the sepia-toned coloring really worked.

Be Prepared by Vera Brosgol

I liked this because sometimes kids are jerks, often kids think they want something and then they get it and it’s not what they wanted, and also sometimes kids are miserable when everyone is telling them they ought to be happy. THESE THINGS HAPPEN. It’s nice to see books reflect that.

To All the Boys I’ve Loved Before by Jenny Han

Solid story that’s mostly about sisters but also has romance. The book also has two of my favorite romantic tropes: actual, legit unrequited love and pretending to be a couple.

Great characters, and I adore the cover. The title actually looks like black magic marker in person and the model actually matches the way I picture the character. So, good job there, publisher!

9/16/18: Reread because the movie delighted me (so delightful!) and I had nothing to read so dug in with this. I have no regrets. It is still a delight.

I am listening to Their Eyes Were Watching God by Zora Neale Hurston since that’s next on deck for my book club. 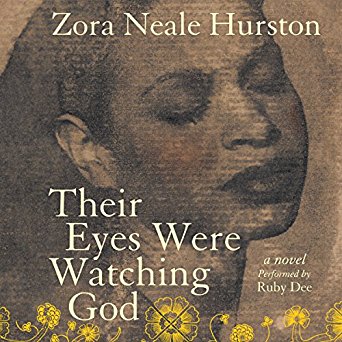 It’s narrated by national treasure Ruby Dee, and while she’s good, she does this thing where she makes Janie sound 80 years old, even though she’s in her 40s. So I don’t know if I’ll stick with the audiobook yet.

It’s not bad. It’s just that I keep thinking about that choice, which is a little distracting.

Okay, my goal is to be in bed by 10 tonight, so I’m going to really try to make that happen. I think I’ll be much more effective at life if I at least attempt to get seven hours of sleep.