So, it’s been several months since I’ve done this (JUNE???), so let’s see if I remember how.

Okay, so I mentioned previously that work had been stressful for most of October (hahaha understatement), so I spent most of November recovering from that and realizing that, once again, I was a mess. I had gained weight again, I had new/worsening symptoms for my IBS, and I (re)discovered just how much debt I’m in. (And the latter two happened at the end of the month.)

Anyway, I was lamenting to my mom about my weight gain and how I don’t understand how it keeps happening because I know I need to manage my weight better to help control my IBS, and I know what to do, and I know how to do it, yet I am always surprised that when I don’t track my food or I make it to the gym less often, I gain weight and then have to start all over again. I mean, you honestly would think I have learned by now.

And my mom said simply, “Because it’s not your default to take care of yourself in that way.”

I was, as the young people say, shook.

So I’m glad she said that because it really made me see that I have to actively work against my default because, well, my default actually doesn’t work.

That, coupled with the work nonsense, let me know that I have to put myself and my own care first. Because, again, my default is to take care of other people (including my students) first when the work nonsense reminded me that if something were to happen to me tomorrow, they would find someone to sub my classes/fulfill the other obligations I have taken on and keep it moving like I had never been there. And while I love my job and the work I do, I need to love myself more.

Right, so in an effort to do that, I tried a fiber supplement that’s supposed to help with IBS stuff. That was a huge mistake because it actually aggravated my existing symptoms and caused some new ones. I just finished the meds related to that and, yes, I feel better, but there are some residual issues, so I’m going to call the gastroenterologist this week to set up an appointment. There may be nothing more to do than for me to increase how much I exercise and keep taking peppermint/drinking peppermint tea, but I’ll feel better after checking in.

The big thing that came from this last incident is that I almost cried when eating a sandwich and thought “Eating makes me sad” so then I googled “eating makes me sad ibs” (I googled it w/out the “IBS” at first but all of those hits were for eating disorders) (also, eating makes me sad because a food I thought was fine kept triggering the new symptoms so I was once again at a loss for what to eat), and I came across this post, which led me to this post, and both made me feel better. Basically, during the treatment for the new symptoms, I had the eating habits of a toddler, and just had to trust that when I was ready for certain vegetables or meats again, I would eat them, and it would all balance out nutritionally.

I was reminded of that tonight when I looked in my refrigerator and saw the only food in there is a container of cooked string beans because I am literally taking it one day at a time in terms of figuring out what I want to eat/can tolerate eating.

I am convinced that 90% of my stomach issues stem from stress, so along with prioritizing exercise (I went to the water aerobics class I hate! I went to a barre class!) and tracking my food, I have also started meditating.

As for the debt thing, I was talking to my therapist about how I feel like all the food stuff and the money stuff and the [insert here] stuff had to be all connected. So then she asked me how much debt I’m in, so I pulled out my spreadsheet and was shocked–shocked!–by the number, even though I have had it written down for years and update it regularly. And, well, denial is very real and to say I was both horrified and impressed by level of denial is also an understatement. I mean, obviously knew I was in debt but didn’t realize just how much (even though I’ve been “working on it” since 2012). So this past week, I got real clear about where I actually am and am taking steps to start my official get out of debt campaign.

The first step? I downloaded an app to track my spending. Fun fact: tracking spending is like tracking food. I have already stopped myself from buying something because I’m like, “Do I want to write down that’s what I spent my money on?”

The goal here, of course, is total honesty. So I can honestly say that after a week of tracking, I spend most of my (non-bills) money on eating out and groceries. We’ll see what happens after I track for an actual month. (This is also my goal for December: track my spending with total honesty.)

Also, I mean, there is also emotional work to do, so that will also be something to look at too.

I mean, has this been a year or what? Whew.

The only two books I finished this month are Rapunzel by Rachel Isadora and Dramacon, vol. 2  by Svetlana Chmakova.

I haven’t made any progress towards my #MustReadin2018 or the Book Riot Read Harder challenges, but I anticipate that changing very rapidly once school is out in two weeks. (Two weeks! Ahhhhhh.) 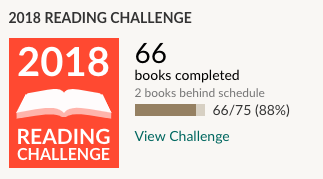 I am two books behind on my Goodreads challenge, but I can’t even tell you how accurate that is, considering I read one manuscript and have abandoned several books this year (which I have started keeping track of along with finished books). I am sure all those pages read add up to however many books the Goodreads total is, though, so I’m going to say it’s accurate. What a journey through my brain, eh?

Here’s to a good December. May yours be merry and bright.