Wow, so much happened in the past week that I don’t know where to begin. 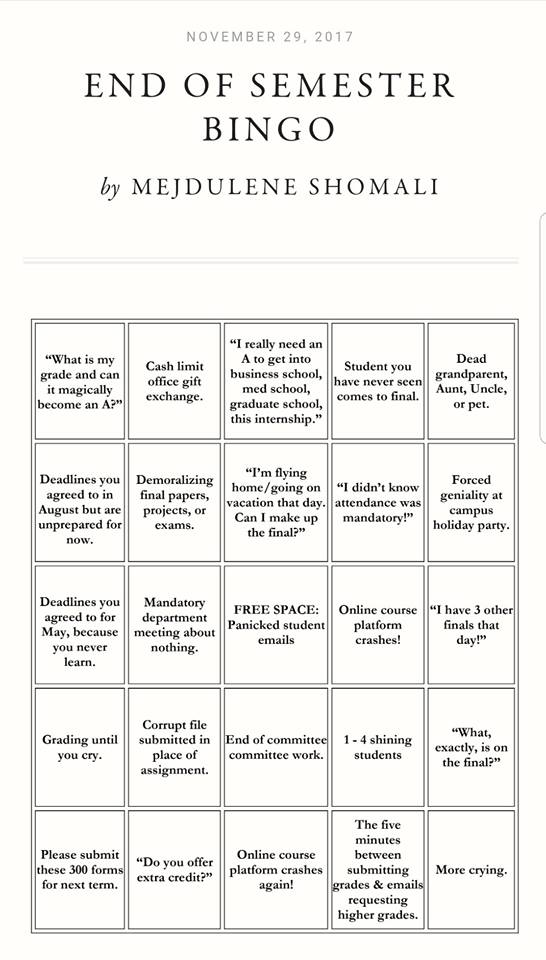 My friend sent me the end of semester bingo card from social media, and I asked her if every square could be “Grading until you cry” and “more grading.” Because that was my main mood.

Oh, and also this:

END_OF_DOCUMENT_TOKEN_TO_BE_REPLACED 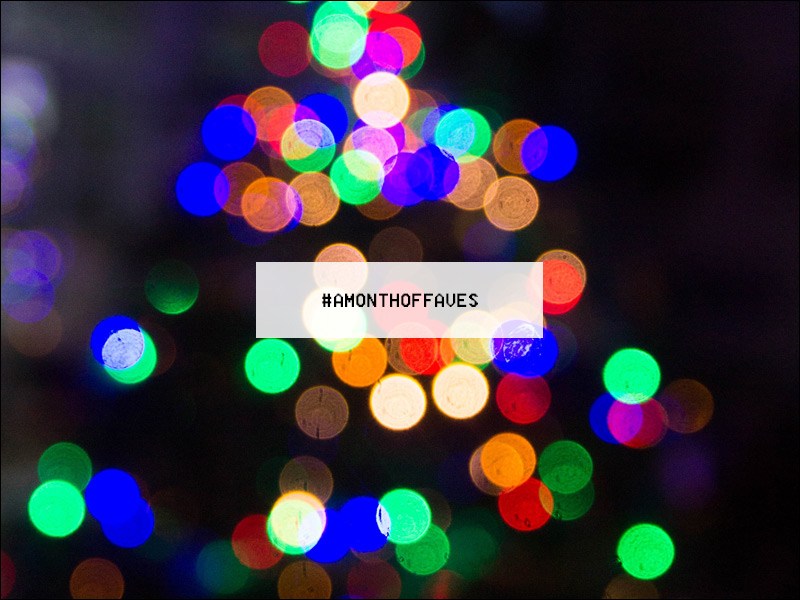 MON. Dec. 10 – A Day (or Weekend) in the Life. What did you do on Saturday, December 8th … or that weekend – December 8-9. Let’s take a peek into each others lives as as we chronicle what we all did on that day (or during the weekend).

It’ll be weekend for me!

3:30 a.m. – Wake up because I fell asleep at 6:45 p.m. after getting home from the gym. Eat food, futz around online (which includes trying to figure out why a book I know I rated on Goodreads doesn’t have a rating and why another book is showing up as having been read twice when I only read it once).

5 a.m. – Have a lie down so I can get up at a reasonable hour and face the actual day

7:22 a.m. – Wake up for realsies, meditate, fool around on Facebook

9:45 a.m. – Head to my support group, run errands, eat some food, futz around online (this will happen a lot)

END_OF_DOCUMENT_TOKEN_TO_BE_REPLACED

1. Okay, so I know I mentioned that I hit a parked car this summer, but did I tell you that I ALSO hit a pillar in the parking garage of my complex? Well, I did. Which means that I have dents on both sides of my car now. Because of that, I came to the conclusion that I must not like my car very much (I mean, I am not this careless in general) so got it into my head that I would sell my car and buy a new one.

END_OF_DOCUMENT_TOKEN_TO_BE_REPLACED

So in an effort to get back on track, I am getting back on track. This is another way of saying that I could either grade or write this post, and, well, you see what’s happening.

The back on track really does mean that I have not been getting enough sleep, so in order to do a better job at that, I have to accept that I’ll have to do more grading on the weekends. This makes me sad face for obvious reasons, but! It’s also the end of the semester so I just need to suck it up and deal.

END_OF_DOCUMENT_TOKEN_TO_BE_REPLACED

My daughter is nineteen today and because we’re living in the future, and she’s on the other side of the country, I FaceTimed with her to wish her a happy birthday and watch her open her gift. I got us tickets to see Hamilton, and she (a) guessed that’s what the gift was and (b) had a lukewarm reaction.

END_OF_DOCUMENT_TOKEN_TO_BE_REPLACED

It’s a step up from “I should be grading,” so I’ll take it. (Also, as a content warning, the Terry Crews and Johnny Iuzzini stories both discuss sexual assault.) 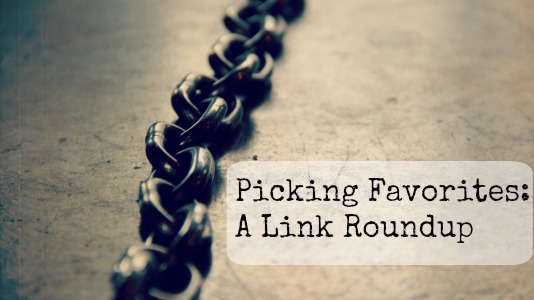 Terry Crews understands that he is in a unique position to speed up that progress. So, instead of internalizing his abuse and spreading it to others with toxic actions of his own, he is taking the steps necessary to break the chain before our eyes. — What About Your Friends? Why Hollywood’s Abandonment Of Terry Crews Is Unacceptable

END_OF_DOCUMENT_TOKEN_TO_BE_REPLACED

1. I didn’t “win” NaBloPoMo because I missed a day, but 29 out of 30 ain’t bad. Memo to self: write posts the day before and schedule them to go live the next day. That’s how I was successful at the Slice of Life challenge this past March.

2. I forgot to link up to all my posts from last week on my Monday post, so here they are now:

3. There will be a part two to the Christmas wish list, but only because it’s getting cold and I realized I need gloves and some other such like.

END_OF_DOCUMENT_TOKEN_TO_BE_REPLACED

I missed posting yesterday because I fell asleep at 6:30 and didn’t wake up until about 1:45. Then, I drank some water and ate some food before going back to bed. I wasn’t feeling that great yesterday, so I obviously needed the rest, but I hate that I blew my streak.

Also, and probably more importantly, I missed a day of grading so am even farther behind. (I was going to put “further,” but I am behind by a quantifiable amount. Also, I strongly advise not counting how many papers one has left to grade. I do this constantly and it never makes me feel better. Because I always have so much more to go, see?)

I am supposed to go to a book club meeting/cookie exchange on Saturday, but I am SO FAR BEHIND I may not be able to go. I really need to consider this. Because I really do want to go AND I read the book. But Psych >>>>>>>> everything else coming up in my life. Which! You would think that would have motivated me to get more grading done today, but no. I chose instead to procrastinate by talking to a colleague about how to teach a class I might be teaching in Fall 2018.

I may have a problem.

Anyway, that discussion did help me figure out what novel I’m going to assign next semester: Station Eleven. Unless I do A Wrinkle in Time. Both could work with the theme of my class! (All books pretty much work with the theme of my class. The theme, btw, is cultural literacy.) (Also, now that I have reread my reviews and because the movie is coming out, I am leaning more towards A Wrinkle in Time. I will probably change my mind again.)

Also, I did finish drafting the rubric for my students’ final paper. So it’s not like I didn’t do any work.

I really need to learn to eat the frog. It’s been 13 years. Do you think I’ll ever learn?

Well, tomorrow is Sunday, which means it’s back to reality. Which is just a depressing way of saying I have a ton of grading to do.

Also, it’s that time of the semester when grading is basically all I’ll be talking about because there are only two weeks left (!!!!).

I mean, I am definitely ready for the semester to be over, but I am not ready for the end of the semester–mostly because of all the grading. But also because I need to write final exams and rubrics and also, of course, grade.

Always with the grading.

I did have a lovely weekend with my friend and her family, and I did get some grading done and a rubric written (on Thanksgiving itself, no less). So I am definitely grateful for the time with delightful people and the space to get work done. Also, let’s be real: I got a much needed mental break by taking the past two days completely off.

But, as Shang from Mulan says, “Tomorrow, the real work begins.”

I think that four-hour nap threw me off my game yesterday because I totally didn’t realize it was Monday so missed my Monday wrap-up. So here it is on a Tuesday.

1. I’m still blogging my way through NaBloPoMo. Posts from the past week with a heavy emphasis on poetry for some reason:

2. Praise the TV gods: The Good Place has been renewed for season three.

3. I didn’t finish any books this past week, so I’m still making my way through these two: 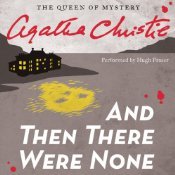 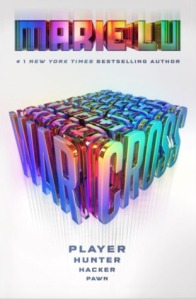 Pictured: And Then There Were None by Agatha Christie and Warcross by Marie Lu

4. I wore jeans to work today (for this first time all semester!), which may have made me a touch too relaxed with my students. We talked about gangsta rap (which I just call “rap,” I told them), I  suggested one student to stop studying something he wasn’t interested in, and I am pretty sure there was something about food in there. Oh, right. The one student said the granola bar he ate for breakfast didn’t count as food because he ate it in two bites. “That’s not even a snack,” he said. “That’s a taste.”

5. I am supposed to be packing for my trip up to the Bay Area for Thanksgiving, but instead I have officially started powering down. I guess it’s a good thing I’m not having office hours tomorrow.

6. Related to that last point, I have been grading so slowly these past few days. I should be speeding through these grammar reviews, and instead I have graded one set per day. Do you know the semester is almost over? And there are other things to grade? This does not bode well is what I’m saying.

7. The Jeopardy! tournament of champions just ended, and I am pleased by the winner. In fact, I actually liked all of the contestants this go ’round, and I don’t think that has ever happened before.

8. I finally put up my tree. It is pre-lit, so the decorating is already halfway done. Perhaps I shall add the ornaments before the weekend is out?

9. The coolest thing about my apartment is that I have a fireplace, which means I can actually hang stockings over it. First time ever! Too bad I won’t be here for Christmas. 🙃 But still!